When Kindness & Compassion Take a Form

Read this beautiful little booklet this evening. What a gem.
Posted by Ruchira Datta at 6:45 PM No comments:

This tale of Ohio, a tale of two crossings, begins not in Dayton, birthplace of Orville Wright, but in Delaware, 80 miles to the east-northeast.  And though that crossing from Delaware transpired a quarter century after the first powered flight, nevertheless it was undertaken more slowly, via ship.

Before that, though: something of the man who made the first of these two crossings.

Albert E. Suthers was born in 1887 in Gympie, Queensland, Australia, where his father managed a gold-field. From the age of twenty young Albert began working as a teller in the Bank of New South Wales. Yet five years on, a restlessness grew in him, to seek out something more—he knew not what. Some said going to college would broaden his horizons. He wondered, though: going to college, to study what, exactly? How could he choose what course of study to pursue, what calling to follow, when that was just the question that was vexing him?

He thought perhaps it was God calling him, that he might be called to the ministry. Still, he wasn't sure of that either. So he went on, tallying deposits and withdrawals, and wondering, always wondering.

One day a friend told him of a university, far away, that taught liberal arts. There Albert might meet with many subjects without having to settle from the first on one. Roaming the vistas of knowledge appealed to him—perhaps somewhere among them he might find what he was seeking. He made up his mind to bid farewell to the bank, and with his savings booked passage across the world. Thus it was in 1912 that Albert first fetched up in Delaware, Ohio, to begin his studies at Ohio Wesleyan University.

By 1917 Albert had his degree. The Great War had been going on for years, and Albert set forth for Kingston, Ontario, Canada, to train for the army. He served in the Canadian Field Artillery, shipping out to active duty in France and Belgium.

The war did not still the stirring of Albert's heart towards God. Upon its end he returned to America, to New York City, and entered Union Theological Seminary. Albert's itching foot bore him to Edinburgh University in 1919, where he lent his arms to the Varsity Rowing Club.  He returned and got his Bachelor of Divinity from Union Theological Seminary in 1921. That year, Albert visited his hometown in Australia as well as journeying to China, coming back to New York to receive his Master of Arts in 1922 from Columbia University.

At last Albert returned to Ohio Wesleyan University to begin teaching the history of religion. Until next time, we leave him there teaching in Delaware, Ohio.

Posted by Ruchira Datta at 10:21 PM No comments:

The Perfection of Yoga

Read The Perfection of Yoga in the laundromat yesterday. Nice book! Considering reciting it on Soundcloud.

It describes the Sixth Chapter of Bhagavad-gītā, the foundation of yoga meditation, and explains the perfection of yoga in the modern age.

This reminds me to contact my Sanskrit teacher. We had been reading together over Skype the Sixth Chapter with the Sanskrit commentaries of Śrīla Rāmānujāchārya, Śrīla Viśvanāth Chakravartī Ṭhākur, and Śrīla Baladev Vidyābhuṣaṇ. This was suspended last semester when he and I were teaching in universities. I want to see whether he's available now that it's summer.

It would be interesting to use The Perfection of Yoga as the nucleus of a comparative study between the Sixth Chapter and The Yoga Sutras of Patañjali.

I would like to learn how to produce ebooks with synchronized narration and word-for-word synonyms in other languages on demand.

I had read Unifying Hinduism a while ago, it provided a very interesting perspective on Sāṅkhya philosophy. It makes me want to get and read the Sanskrit commentary of Vijñānabhikṣu on The Yoga Sutras of Patañjali.

That also reminds me that I had started reading Varaha, Vidura, & Kapila, which is beautifully written and provides deep insight into Sāṅkhya philosophy, several months ago. I was really liking it and got about halfway through when life happened. I want to take it up again.

I also want to continue reading Krishna's Other Song: A New Look at the Uddhava Gita.

An ebook with narration, studying these books and Sanskrit commentaries, could form the basis of courses on yoga philosophy. 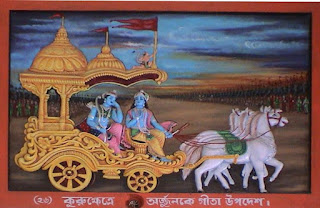 Posted by Ruchira Datta at 1:21 AM No comments:

Music Practice Session in the Park 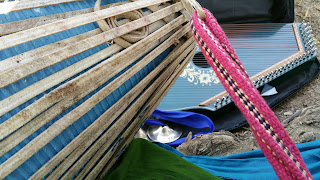 Posted by Ruchira Datta at 4:52 PM No comments: